Platform 3 is dedicated to the optimization of new technologies allowing to increase the synthesis gas (syngas) production from non-homogeneous biomass as well as the conversion of syngas into added-value chemicals such as fuels. Two main technologies are used for this conversion: gasification and reforming.

One of the ongoing projects at CRIEC-B, in partnership with Enerkem, aims to convert residual carbon in the form of tars (polycyclic aromatic hydrocarbons) and light hydrocarbons issued from the wood and municipal solid residues (MSW) gasification process into syngas. The process developed at the chair schematized below uses the char also derived from the gasification process as a low cost catalyst for this conversion. 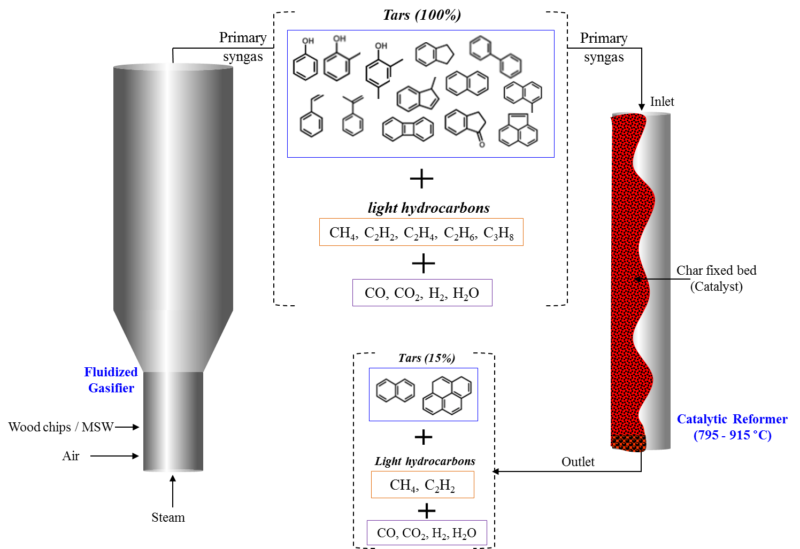 The team optimized the design and the operating conditions of the process and they were able to convert up to 85% of the tars fraction at temperatures below 900°C! Only naphthalene and xylene have not been converted. However, they are less toxic and can be recovered and safely disposed. In addition, conversions greater than 30% of the light hydrocarbons were also achieved.

Another project of the platform 3 is electrocatalytic dry reforming of methane. The technology used, initially developed by our industrial partner Hydro Quebec, allows the conversion of methane and carbon dioxide, the two main greenhouse gases, into syngas using a very low cost iron-based catalyst that can be bought at a hardware store: the steel wool! Renewable electricity can be used in the process to provide energy to the reaction and to specifically heat certain parts of the catalyst. So this process allows the chemical storage of renewable electricity. The video below shows how this technology works.

The CRIEC-B team optimized the process and developed a disruptive catalyst activation method that allows its use for more than 200 hours without deactivation and with methane and carbon dioxide conversions greater than 99%! A patent was recent filled for this activation method.

The team worked on scaling up this technology and they designed a pilot with a capacity to convert 40L/min of greenhouse gas. The setup used for the process optimization and the 40L/min pilot are shown below. Important parts of the set-up such as the furnace, the central part of the reactor as well as the heat exchangers were homemade in order to maximize the conversion rate of the reagents and to minimize the overall cost of the set-up. The pilot is currently under troubleshooting and it will be operational by spring 2018! The implementation of this pilot was a big achievement of our team and the tests results obtained with it will be used to develop another pilot capable of operating at 200-400L/min.